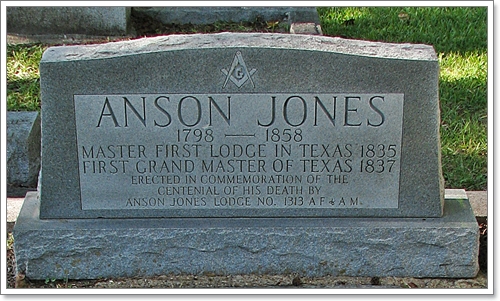 Jones served as the last President of the Texas Republic before it became part of the United States. He was born in Seekonkville, Massachusetts, he studied medicine and was licensed to practice in 1820, but his efforts were unsuccessful; he moved to Norwich, Vermont and opened a drugstore, but that too failed. He traveled west, but after being arrested in Philadelphia, Pennsylvania by a creditor he stayed there running a medical office and teaching school until 1824, when he went to Venezuela. Returning to Philadelphia in 1826, he opened another medical office and received his doctorate in 1827, also joining both the Freemasons and the Odd Fellows. He rose to become Master of his masonic lodge, but his business was still unsuccessful, giving up medicine in 1832 he left for New Orleans, Louisiana to become a merchant. He went to Texas in October 1833 to again try his hand at medicine and this time he succeeded. After a year of hoping for a consensus between Texas and Mexico, he enlisted in the Texas army during its fight for independence, serving as a surgeon during the Battle of San Jacinto. After the war, he returned to Brazoria, Texas to resume his practice. Becoming increasingly interested in politics, he was elected to the Texas Congress in 1837, became the minister to the United States in 1838, the senator representing Brazoria County in 1839, and was the Secretary of State under President Sam Houston during his second administration from 1841 to 1844. In September 1844, Anson Jones was elected the fifth president of the Republic of Texas. When the United States President James K. Polk called for the annexation of Texas, Jones wavered, although the Texas Congress was for accepting the proposal to become another state. Jones continued to delay a decision, which caused his popularity to plummet; he was hoping for a treaty of recognition from Mexico which he felt would give Texas a stronger bargaining position. Once he actually received the treaty, it was rejected outright by the Congress, Jones was censured and annexation was adopted in 1846. Retiring to his plantation near Washington-on-the-Brazos, he had hopes for election to the United States Senate but Sam Houston and Thomas Rusk were nominated instead. For years afterwards, he grew more and more despondent over how he felt he was viewed by his fellow Texans and formed a deep hatred for Sam Houston. He authored a book entitled "Republic of Texas", but it wasn't published until 1859, after his death. Deeply depressed by his loss of Texas and an injury to his arm, Anson Jones shot himself on January 9, 1858 in Houston at the Rice Hotel - the site of the former capital of Texas. Jones County and the town of Anson were both named after him, and his plantation, Barrington, is part of the ﻿Washington-on-the-Brazos State Historical Park. ﻿
(bio by: Screwtape)
Anson Jones' wife, Mary Smith Jones & their home known as a dogtrot house or breezeway house. 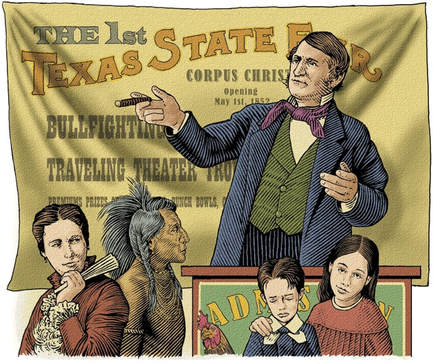 Back to Top...
Powered by