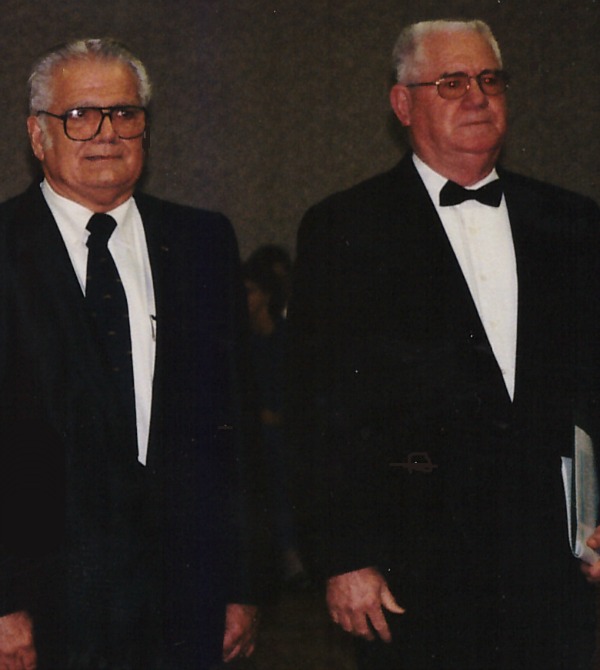 PGM Joe Johnston and PGM Lloyd Wilhoite .
To pause and read the Grand Master's program below,
click pause and then use arrows to flip pages
or click on page number at left. 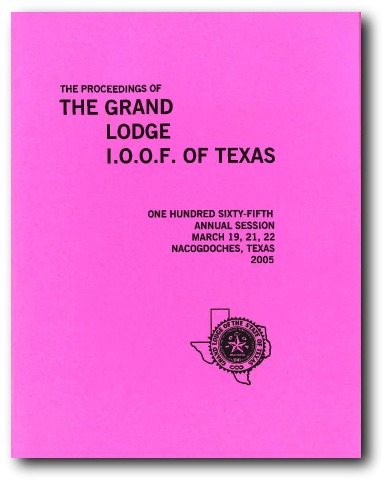 TO THE GRAND LODGE I.O.O.F. OF TEXAS:     As most of the members know, this has really been a trying time in my life. I lost my beloved wife, LaDean, on December 11, 2004. It has been an honor to serve as the Grand Master of the greatest of all Grand Lodges - Texas. During the past year, my wife LaDean and I, along with Brother Frank Ford and Sister Rosa Ford, went to Washington, D.C. for the laying of the wreath at the Tomb of the Unknowns. I will tell anyone that this is a very touching experience. If a person has any part of a heart in their body and experiences deep feelings, they will be extremely moved. Thanks for affording us this privilege and honor. It is a memory with my wife and friends that I will cherish forever.

Upon our return from Washington D.C., I began making my official visits. I have been truly blessed with wonderful fellowship and the pleasure of meeting so many of our members in lodges across our great state. I cannot possibly remember and name each face of the members of all the lodges I attended, but I do want to say to each of you, thank you. Thanks to the following lodges for holding degree rallies this year, Mt. Pleasant No. 66, Denton No. 82, Athens No. 961 (2 rallies), Corsicana No. 63, Conroe No. 67, and Brownwood No. 219. I have not kept up with the number of candidates, but I feel there has been a good number initiated and finished up this year.

On September 21, 2004 my wife fell at Malakoff, breaking both of her ankles clear through. After months of hospital stays, nursing and rehabilitation, followed by additional surgeries resulting from bone infections, she passed away. I was only a few weeks out, at the time, from the placement of the stint in my heart; however, God gave me the strength to see it through. With the help of our daughter, Donna, son-in-law, Peter, granddaughters, Stephanie and Lisa, and two daughters-in-law, Beverly and Lynn, she was rarely alone from September 21 to December 11 when she died. When we look back, we will never have to say, "I wish I had..." because we did. We know she was singing Happy Birthday to Jesus in person this year, just as our grandson, Jason, read at her funeral. My special thanks to all of you for the calls, letters, and cards throughout the entire stay, but especially to those who attended her funeral services. I asked for a show of hands and know this was one of the two heaviest turnouts I have witnessed in all my years as an Odd Fellow. Without your unwavering support I would not and could not have continued. My daughter phrased it well, "If there is such a thing as a beautiful funeral service, Mother had it. The outpouring of love from the Odd Fellows and Rebekahs, with the laying of the evergreens, will always be instilled in our hearts." Our heartfelt gratitude cannot ever be truly expressed, but each of you made our hearts a little gladder, on a day of utmost sorrow.

Within the past few months I have had to have several injections in my spine. I am doing better now. Perhaps spending Christmas with my daughter, Donna, and son-in-law, Peter, four grandchildren and their families, including eight great-grandchildren, helped a little.

I would like to express a special thanks to the,Grand Lodge office staff for all the help I have received throughout the year. Without you I don't believe one person could handle this job. To the Board of Trustees, thank you for the wonderful job you are doing and will continue to do. Sister Geri Callender, thank you for all the many hours you put in the retirement center. You are doing a marvelous job. To Kelly Wolfe and staff at the nursing home, thank you for the job you do every day. It was very impressive to me when I walked in on a Tuesday afternoon in December. The facility looked immaculately clean and well-kept. To the Executive Committee, it has been both an honor and a privilege to work with you. I am especially thankful for the wisdom and guidance you dispensed.

To Sister Rosa Ford and the ladies of District 13 and anyone else that I would probably fail to mention names, for the wonderful reception given in October at Ennis Lodge. Please let everyone know I recognize the trouble you went to and the effort to attend, and do truly appreciate it. To the members of Ennis Lodge, I thank you most sincerely for your support, encouragement, and unfailing prayers.  If I did not mention any lodge or person, I ask you to forgive and forget, as this was not intentional.

Lastly, although she is no longer with me on earth, I would like to thank my beautiful bride, LaDean. She always said to do what God had called me to do. She went to many meetings and traveled many days with me. She brought joy, laughter, and love into my heart and life. I miss you but as you wished, I will carry on with God's help.

(See obituary below)
Joe Johnston, 76, passed away June 11, 2015 in Conroe, Texas. He was born on December 25, 1938 in Dialville, Texas to Elton and Callie Mae Acker Johnston. Joe was a long time member and Deacon of Friendship Baptist Church in Jacksonville, Texas; current member and Deacon of Center Hill Baptist Church in Willis, Texas. He was a member of the Masonic Lodge. He was initiated as an Oddfellow on April 18, 1974, was a member of the dismissed Summit Lodge #157 from 1974 to 1988. In 1989 he transferred to William Tell Lodge #27 and was a member there until 1994. In 1995 he transferred to Athens Lodge #961. In 1996 he transferred to Ennis Lodge #227 and was a member there until 2007. In 2007, he transferred to Conroe Lodge #67 and was a member there until his death this year. During his time as a member of the Oddfellows he held the titles of Past Noble Grand, Past Grand Treasurer, Past Grand Master of Texas. He honorably served in the United States Army. Joe is preceded in death by his previous wife, Ladean Jones Curry Johnston, parents, Elton Berch and Callie Mae Acker Johnston, brother, Darrell Johnston and grandparents, Geoge and Carrie Dement Acker and David and Mary Johnston. He is survived by his loving wife of 10 years Nella Walker Johnston, daughters, Ann Lemons and Elaine Barnett, step daughters, Lolita Thompson, Angee Dillard and Jerry; Artis Lothman McCormack, sister Sarah King and sister in law Glenda Johnston, grandchildren J.D. Dillard, Alice Lothman, Jade Chemene and husband Chris, Arthur Lothman, Allen Lothman, Gina Thompson, Arianna Lothman and Logan Thompson, foster grandchildren, Ronde York and James York, great grandchildren, Riley York and Levi York. Visitation will be held at Cashner Funeral Home on Sunday, June 14, 2015 from 3-6pm. Funeral service will be in the Cashner Colonial Chapel on Monday, June15, 2015 at 10am with Bro. Don Bradshaw. Burial will follow on Monday at 3pm at the Resthaven City Cemetery in Jacksonville, Texas with Pastor Larry Smith. Pallbearers will be, J.D. Dillard, Arthur Lothman, Allen Lothman, Chris Chemene, James York, Cody Mixon and Jerry Dillard. Honorary Pallbearers will be Past Grand Masters of the I.O.O.F, and Henry Blahuta.

Located at Resthaven Cemetery in Jacksonville, Texas
Back to Top...